Internet is very dear to me! That may sound strange but I come from a generation where I understand the difference between Internet and no Internet. I can still remember boring hours on taxi where I looked out the window in search of something interesting that would make me excited (of course taxis in Tehran where I grew up is considered a common method of transportation like buses with 4,5 people crammed into a car). That time has long been passed. My mobile phone is the source of all the interesting things I would look for and now I look out the window while I am on my morning commute to get some peace and maybe plan for the day ahead of me.

Internet has changed a lot since the first time I got connected and opened the familiar home page of Yahoo! Today communications are vastly improved and availability of Internet has become so natural that Mark Zuckerberg recently called to recognize Internet as a human right, just imagine a generation before was denied this human right!

Something has changed though. The power of communication has made what was previously impossible now possible and if you ever doubted what this power can do have a look at the prisoner’s dillema from the theoretical perspecitve and this article which is an example of many similar stories. People around the world now engage in conversations and this in turn makes it possible for large number of them to converge on a singular frame of mind on a particular topic. The synchronization effect of communication has brought a new view of the world. Contents become viral in a few days, several milion people talk about it and as fast as it became popular it is forgotten. After all we have a limitted capacity of attention and there are many interesting events going on around the world that may interest us. In many ways this is a great oppurtunity many problems that were previously difficult to tackle now become managble. This effect is very similar to a revolution in computing where now we can process massive amount of data by using large number of comodity computers only because we can coordinate them and make data accessible to all of these individual machines. An idea that would have taken years to take shape now become reality only by calling for support from all over the world. But this revolution just like any other change has unintended negative consequences and one of these changes is what many call public shaming and I would like to discuss it a bit more here.

This morning when I was ridding the bus to work I opened Twitter as usual and scrolled through all the tweets that came in since last time I opened the app, and believe me it was not very long before then. One particular tweet startled me though and I took an screen-shot to reproduce it here. 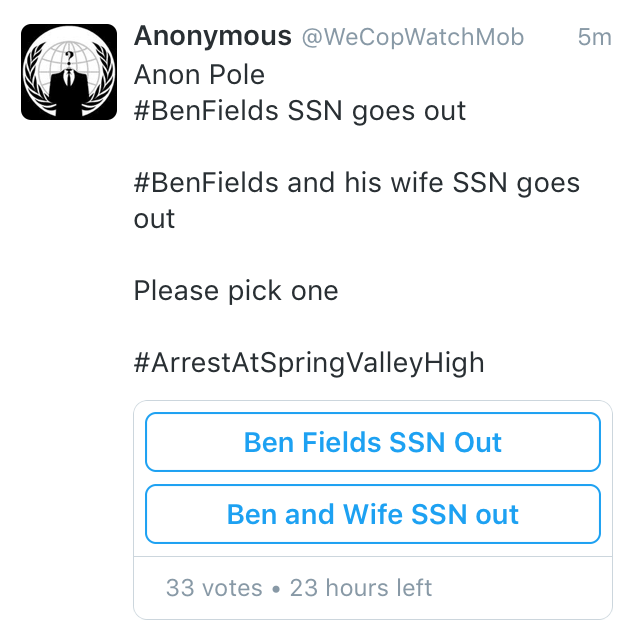 The group Ananymous has asked its followers whether they should release Social Security number of a person or that person and his spouse and as you can see the question came in the form of a poll with only two buttons! I don’t know the targets in this tweet and to be honest I rather not know because I believe it may cloud my judgement. There has been a lot of debate over public shaming recently. Monika Lewinski’s The price of shame and Jon Ronson’s When online shaming spirals out of control are probably among the best descriptions of consequences of public shaming and I invite you to listen to their accounts for better undrestanding of this phenomenan.

It is probably very hard not to agree with these people once we try hard enough to go pass the wrong those who became targets did (if they actually did any wrong). Assuming we agree with their points about consequences of public shaming and targeting individuals on internet my question now is what should be my reaction to this tweet? I had three options, I could close the app think about the question and write a blog. I could vote for one of the cases depending on how much I thought the target should be punished even though I did not have the faintest clue of what he had done until that point, or I could vote for the less severe punishment i.e., try to minimize the damage by voting only his SSN to be released.

As you can probably guess I took the first option but that does not solve the problem. I still don’t know what the right answer is. The question is very similar to a philosophical question I learned about for the first time from Michael Sandel in his Justice course. I did not intervene but only on the surface. Me not answering the question can potentially mean those who answer and have the opposite view of mine can ruin a life. Had I answered the question and voted for only disclosing the target’s SSN and not disclosing his wife’s I would be blamed for participating in ruining his life even though my whole intention was to minimize the damage.

This sort of philosophical dilemma is not new to humanity, since the dawn of civilization we have been dealing with similar problems in different contexts. It is no coincidence that almost all popular religions address questions of this sort in one way or another and why over time they become the foundation of modern civilizations.

You shall not take vengeance or bear a grudge against your kinsfolk. Love your neighbor as yourself: I am the LORD. - Leviticus 19:18

Our recent advances in science and technology pose new challenges for us. That has been the case since technology started to take a major role in our societies and I don’t believe there is any way other than tackling these challenges so that we enjoy the fruits of our efforts. This is not the first time we are trying to address problems like this and they are not in anyways impossible to address. However this time we may have a chance to use the same technology to control these negative side effects and turn them around before it costs us a lot like before.
I personally hope we will be able to address these challenges before some law suppresses these issues only to resurface somewhere else in a new form and in the mean time take away whatever good we could hopefully get out of this environment called Internet.